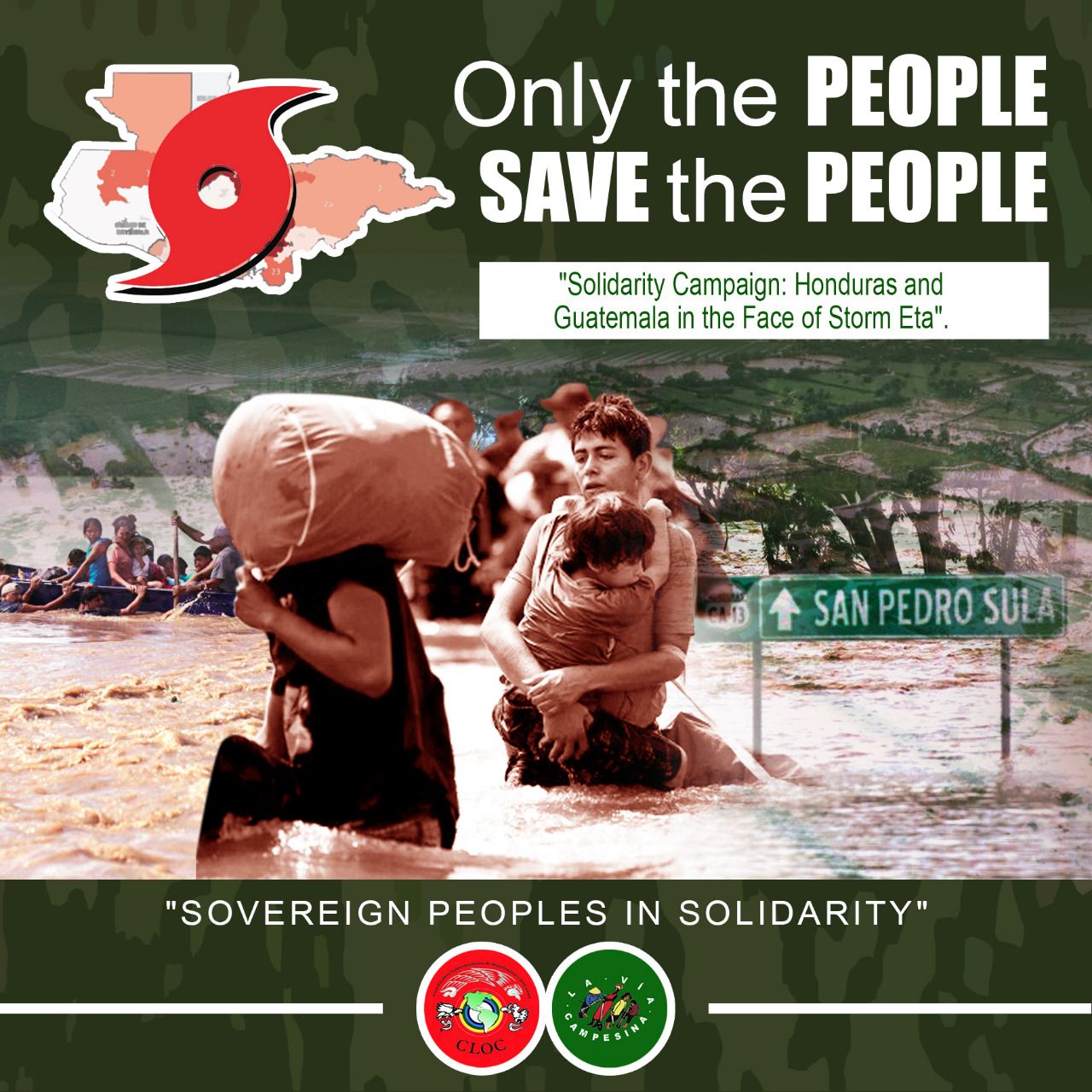 Central America is a region that is very vulnerable to the effects of climate change; a region with a convergence at the end of the rainy season with storms and hurricanes, landslides, and river flooding. In recent days, Hurricane Eta has left infrastructure and peasant farms destroyed and a loss of human life.

Our peasant organizations, workers and indigenous peoples in Honduras and Guatemala are going through a very difficult time and this situation is also due to the governments that have implemented neoliberal policies that have resulted in illicit enrichment of the dominant governing political and business class, the absence of institutions, corruption of state funds and international cooperation; and in addition, the privatization of basic services.

As a consequence of these operations, the dispossessed class: the peasantry, the workers and indigenous communities suffer the abandonment of their States. The socio-economic and environmental situation of these sectors is vulnerable, and it worsens when it comes to meteorological phenomena or health crises like the COVID-19 pandemic that we are currently experiencing.

Honduras and Guatemala are two countries that systematically denounce the lack of social and economic policies; the abuse of power aimed at monopolizing lands and territories for the expansion of monocultures and extractivism, a reality that violates the rights of the populations, but above all causes the slow and progressive destruction of natural assets.

With the arrival of Hurricane Eta, this reality is more than evident. Our peasant and indigenous organizations in both countries, the National Center of Rural Workers – CNTC and the Council for the Integral Development of Peasant Women – CODIMCA in Honduras; the Committee for Peasant Unity – CUC and the National Coordinator of Widows of Guatemala – CONAVIGUA denounce the lack of prevention and evacuation plans for the affected areas by their governments.

In Guatemala, the Committee for Peasant Unity – CUC, member of CLOC-VC, reports dozens of flooded and isolated communities, damaged houses and infrastructure, hundreds of hectares of peasant crops totally lost by the flooded rivers, absence of shelters and overcrowding of families. This panorama is mainly in the Polochic Valley and various municipalities in the lowlands of Izabal, Alta Verapaz and El Quiché. In the highlands of Alta Verapaz, El Quiché and Huehuetenango, torrential rains have caused landslides that have resulted in loss of life, destruction of homes and crops, as well as the cutting of roads by the landslides.

Only the People save the People! is the slogan in these two countries that are facing the storm with the solidarity of the same compatriots that with their own actions have given themselves the task of collecting non-perishable food, medicines, biosecurity products and other important items to solve some basic needs.

Let us unite all our strength for the solidarity of the people and let us join resources to help alleviate and mitigate the disaster left by Hurricane Eta, coordinating efforts with the organizations mentioned above.

We will be sharing solidarity call links and you can also contact the Operational Secretariat of CLOC-Vía Campesina at secretaria.cloc.vc@gmail.com or +505 8998 5564 to coordinate your donation.

Communications / Solidarity Calls from CLOC-LVC Organizations (we will update this list on an ongoing basis):

Council for the Integral Development of Peasant Women – CODIMCA

The Committee for Peasant Unity-CUC Guatemala

Make a donation for CODIMCA, CNTC, and CUC through Grassroots International: https://grassrootsonline.org/get-involved/donate/hurricane-eta-emergency/